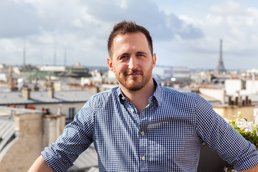 Loïc Sfiligoi is Mathematics and Computer Engineer Graduate from INSA Toulouse in 2014, with a specialization in international trade.

Having worked with several startups, Loïc has mainly worked in Sales Positions, developing the US and Canadian markets for the startup Adveez and setting up the acquisition and business development strategy of Logmatic.io.

He met Guillaume Polaert when he was leading the Sales Team at Logmatic.io, they worked hand-in-hand on projects dealing with large accounts. Guillaume will later become his co-founding partner at Pubstack.

After leaving Logmatic.io, Loïc left France for the Netherlands to develop the sales activity of an SME in 17 countries in Northern and Eastern Europe. This experience allowed him to improve his knowledge of international development and reinforced his intention of setting up his own company.

Following this mission, Loïc and Guillaume Polaert founded Pubstack.io in 2018 to help publishers thrive in a complex programmatic world. Since then, Loïc has been in charge of the company's commercial and financial development. Pubstack is now working with more than 60 digital media companies with +10000 monitored websites, and in late 2021 the company raised +6M € in a Series A funding round.